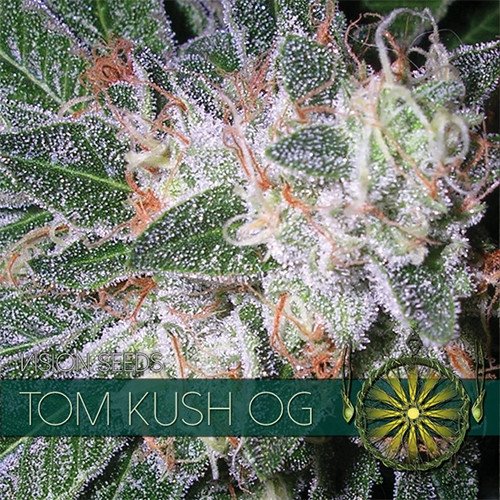 Tom Kush OG is very closely related to the original OG Kush that is so popular on the west coast of the United States. The original OG Kush is believed to be a cross of Chemdawg and Hindu Kush and Vision Seeds’ own version adds some Lemon Thai into the mix to crate a strain that is 75% indica.

When grown indoors it will remain a fairly squat plant that shouldn’t exceed a meter in height while outdoors it can grow into a tree when planted directly in the ground – 300 cm. is not uncommon in such circumstances. Indoor flowering will take about 8 weeks although outdoors in the northern hemisphere harvest will not be ready until sometime in October. Its buds have a very high density and are covered in resin-exuding trichomes. Yields are excellent with 550 gr/m2 from indoor plants and as much as 1200 gr/m2 outdoors.

The aroma is quite typically indica with an earthy pine quality accompanied by sour lemon with woody notes. This is one exceedingly potent cannabis strain with average THC levels of 22% and some examples producing as much as 25% THC in skilled hands and good conditions.

The effect is heavy-hitting and is extremely adept at banishing stress. Tom Kush OG also proves effective against anxiety while helping to relieve ADD/ADHD, PMS and PTSD. It has also shown itself to be able to help reduce symptoms of migraine.