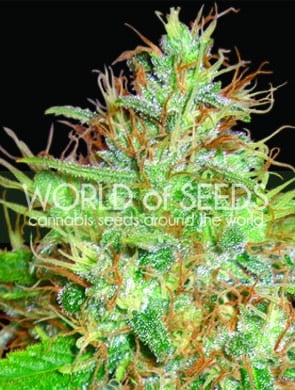 Afghan Kush x Skunk sees the blending of two of the most important and influential cannabis genetics ever. World of Seeds’ own Afghan Kush originated locally in the Hindu Kush mountain range of northern Afghanistan. Skunk #1 was the first man-made true-breeding indica-sativa hybrid strain and began the modern cannabis breeding success story which has spread worldwide.

The genotype of this strain is 100% indica and is said to have a high medicinal value. It is a large and vigorously growing plant that can grow to a height of 2 metres and producing buds of a singular density and high resin production. This plant is the very epitome of hybrid vigour and delivers very good yields, especially outdoors. Indoor flowering times are fast and harvest time will be approximately 45 – 55 days after the start of flowering. Yields will be in the region of 400 – 450 gr/m2. Outdoors wil see Afgan Kush x Skunk achieve its maximum potential as long as the weather is good until early October in northern latitudes in order to achieve the highest possible resin production. It nevertheless has very good resistance to both mould and a wide range of plant pests and each outdoor plant can produce as much as 900 gr.

This strain is characterised by the flavour of noble woods and its 19% THC level gives an effec that is both potent and euphoric. The addition of the Skunk genes increases the therapeutic qualities of the Kush and takes it to a new level.