Sexing is an important aspect of the overall marijuana propagation process; cannabis plants normally come in two sexes, male or female. Each sex has its own very distinct flowers. Female flowers are more potent than male flowers. Growers usually remove and destroy the males from their gardens because of their very low content of cannabinoids such as THC and CBD. Both male and female plants can transform into hermaphrodites under stress. 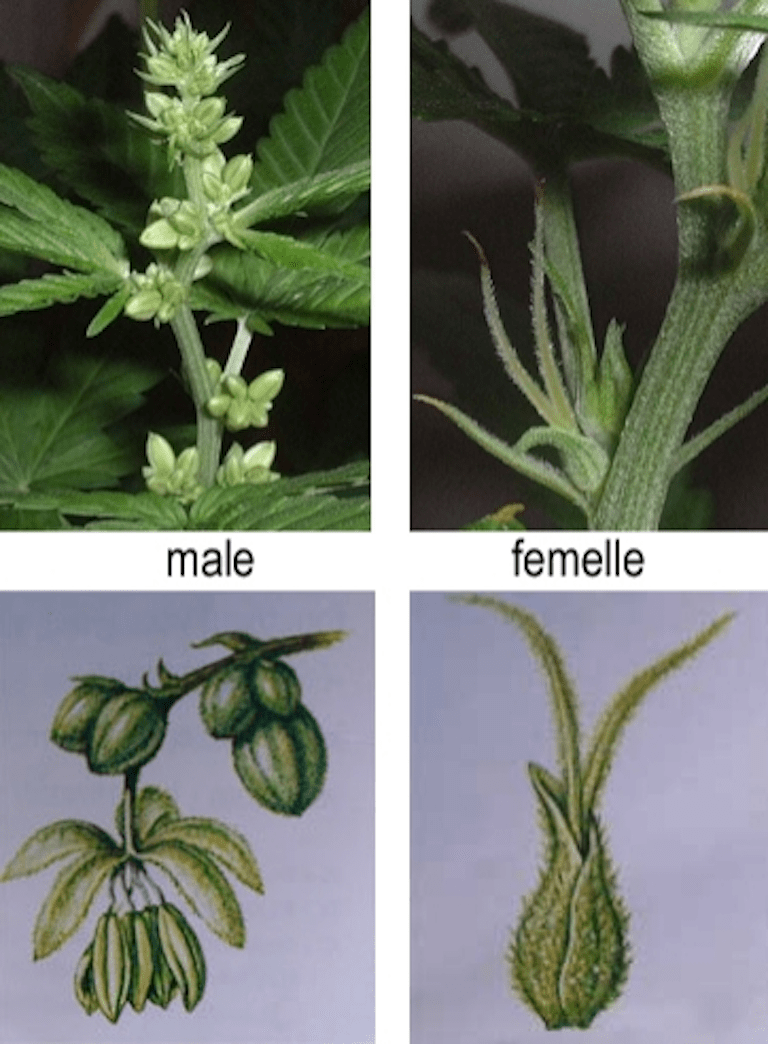 The reason you’ll want to sex your plants immediately is so you can identify and eliminate the males – it’s the flowers of the female that you’ll want to grow if you’re interested in the psychoactive effects. Without chemical extractions, the female flower is the only part of the plant that can be used for medicinal and recreational purposes.
A female plant that is not pollinated will spend most of its energy later in its growth phase developing the flower buds and swelling them with the resin that contains most of the potency of marijuana. The plant does this so that the large sticky flowers are more likely to catch pollen. 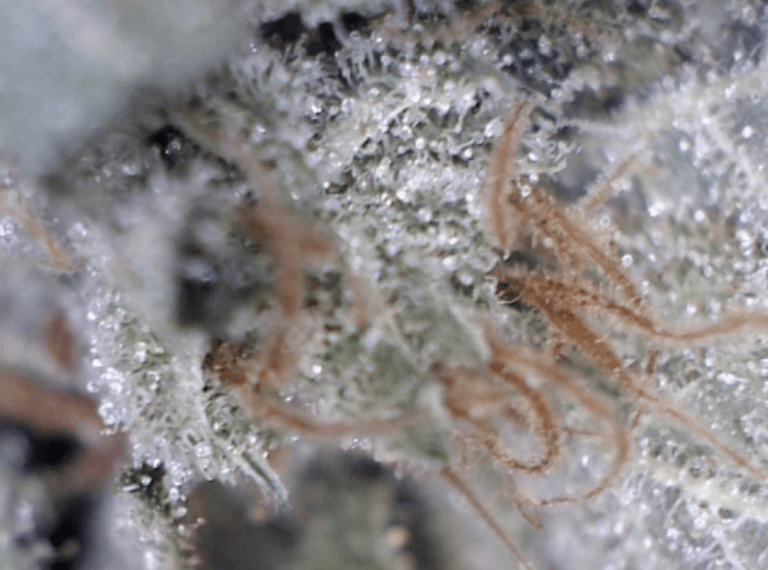 If the flower is pollinated, it will devote most of its energy to the production of seeds. This is where the poor quality of dirt weed comes from. If your pot is covered with seeds, it is weed. The more seeds in the pot, the lower the quality. Seeds add considerably to the weight (they weigh more than the bud itself), unlike the stems which are mostly water and have negligible weight compared to the bud itself.
Plants should generally show their sex one to two weeks after flowering begins. During the first ten days of flowering, there is no need to worry about males pollinating your crop. Also, if you are breeding by cloning, you only have to worry about males once.

Pre-flowers, as opposed to full blown flowers, generally appear after the fourth week of vegetative growth from seed. Pre-flowering typically lasts about 1-2 weeks. Pre-flowering is the stage in which your plant begins to fill out nicely and its sex becomes apparent. At the start of your plant’s growth you will not know whether your plant is male or female. At this time new growth regions begin to appear and change shape depending on your plant’s sex, which then becomes obvious to the grower. 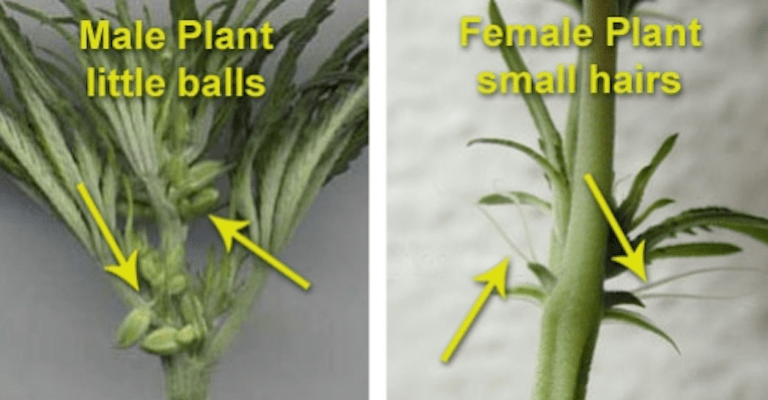 Pre-flowering begins when your plant’s height stops growing. Also, looking closely at your plant reveals small new growths are beginning to form at the nodes between the stem and the branches. Check carefully above the fourth node. These small new growths will become leaves, branches and flowers!
Note: Pre-flowers are very small and and almost impossible to differentiate without magnification. A photographer’s 10x loupe or a magnification lens is handy when examining pre-flowers. More on this later.
Many times pre-flowers will appear at the fourth or fifth node, whereas the plant is on the 7th or 8th node. These pre-flowers usually don’t develop into full flowers, but are only an indicator of the plants sex.
Pre-flowering is the stage when you cross your fingers for as many females as possible. It is early in this stage that you can make an accurate guess about your plant’s sex.
If you plan to move any male plants out of your garden, you will do it a week or two into this phase. A male plant will produce little balls that are clustered together (much like grapes). The male plant produces these pollen sacks that, when the time is just right, will burst and spread pollen to the female plants. A female plant produces little milky white pistils that look like hairs in a pod. These hairs (pistils) will begin to curl slightly and grow longer and thicker. These hairs are also very sticky, but do not touch them as they contain your much valued THC! The hairs also will begin to cover in resin during the Flowering period (this is for catching the male’s falling pollen). If the female is not pollinated then she will feel unloved and begin to produce and grow even MORE sticky THC-rich areas all over her flowers… hence the resulting development of a Sinsemilla crop, which means higher quality frosty incredibly dank buds!

So marijuana seeds grow into cannabis plants that are either male or female, but how can you tell?
Male: Males can be identified by looking at the inter-nodes where leaf and branch stems connect with the main stalk. Males are often, but not always, tall with stout stems, sporadic branching, and few leaves. When a male enters the stage of flower development, the tips of the branches where a bud would develop will start to grow what looks like a little bud (little balls) but it will have no white hairs coming out of it.
Male flowers will contain balls somewhere between the size of a marijuana seed and a popcorn seed. One ball is not definitive since female pistils sometimes split from a small single ball that opens. But two or three balls in a cluster is sure confirmation that you have a male. Males should be removed and destroyed to prevent them from releasing pollen into your garden. The pollen transports easily so the males can not be safely grown anywhere that shares an A/C or ventilation system unless special precautions are taken beforehand.
The male preflower may be described as a “ball on a stick.” However, its most recognizable feature is its absence of pistils. Sometimes, a male plant will develop mature staminate flowers after prolonged periods of vegetative growth. These appear in clusters around the nodes.
The following image shows a male plant in early flowering. Staminate flowers are located at the node between the stipule and emerging branch.

The male plant will have balls of pollen which in nature produce pollen and showers & pollinates the receptive hairs of the female plant, which once pollinated will produce seeds. If the female plant isn’t pollinated (by keeping the male plants away), she becomes very annoyed and will begin to continuously produce thousands and thousands of hairs in the hope to catch male pollen. So the flowers/buds will continue to grow, develop, and produce lots of rich THC.
Note: Female plants that are pollinated will use life energy for producing seeds instead of THC. This results in lower potency marijuana, and high seed yields. Male plants in general will be less potent and produce less THC than a female plant.

Female: Female plants produce tear-drop shaped balls called “calyxes” at the nodes between leaf and stem. Each sprouting two white hairs or, “pistils.” Another identifier is that the female plant’s leaves will grow closer together forming a strong stem which will hold the clusters of flowers and later the ripening seed. Females will have no balls and will have small white hairs. As the images below demonstrate, the female preflower is pear shaped and produces a pair of pistils. Frequently, the female preflowers do not show pistils until well after the preflowers have emerged. Thus, don’t yank a plant because it has no pistils. Pistillate preflowers are located at the node between the stipule and emerging branch.
Also, some female preflowers never produce pistils. A female preflower without pistils is difficult to distinguish from a male preflower. Thus, hermaphodite issues should not be resolved by the appearance of preflowers, without pistils, on a plant otherwise believed to be a female. 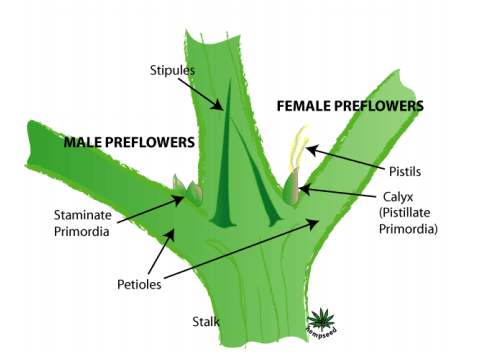 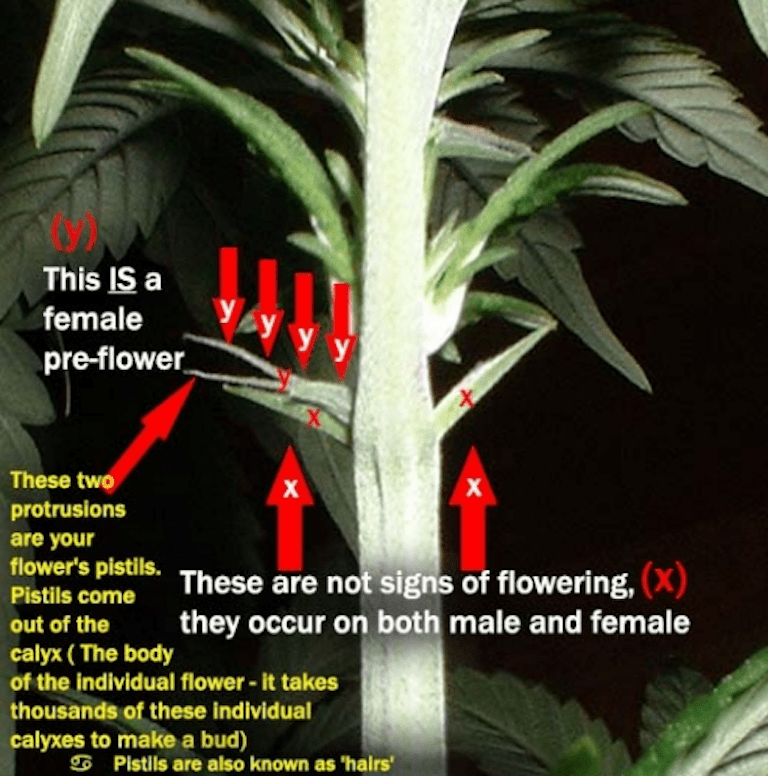 A hermaphrodite, or “hermie”, is a plant of one sex that develops the sexual organs of the other sex. Most commonly, a flowering female plant will develop staminate flowers, though the reverse is also true. Primarily male hermaphrodites are not as well recognized only because few growers let their males reach a point of flowering where the pistillate would be expressed. 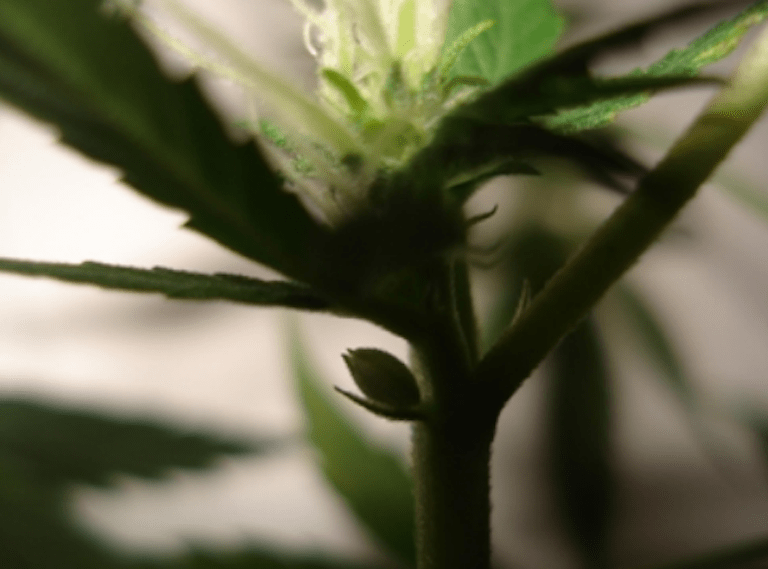 Hermaphrodites are generally viewed with disfavor. First, they will release pollen and ruin a sinsemellia crop, pollinating themselves and all of the other females in the room. Second, the resulting seeds are worthless, because hermaphrodite parents tend to pass on the genetic tendency to their offspring.
Note: Occasionally specious staminate flowers will appear in the last days of flowering of a female plant. These do not drop pollen and their appearance is not considered evidence of hermaphroditism.
The following is an image of a hermaphrodite, or more specifically; a female plant with staminate flowers.

If your plant didn’t show any pre-flowers or they showed pre-flowers but you want to be really sure about what sex your plants have, you will have to wait for the real flowers to mature. Indica tends to flower earlier then Sativa dominant strains, so keep that in mind. So by looking at the flowers you can identify the males and females to determine if you want it. Remember if the plant has both males and females flowers it’s a dreaded hermaphrodite.
It is possible to induce flowering in plants with 12/12, identify the males, then to re-veg by going to 24 hr. light. The males will show their sex within 2 weeks of 12/12. They will then revert to vegetating after a couple weeks of 24 hrs. However sending back plants into the vegetative phase cause unnecessary stress and stretch. Therefore it better to force flowering on clones. Since you are only interested in the sex and not in the yield of the clone almost any type of grow light will do. Also if you are flowering clones just to figure out the sex, you do not have to root the clone yet, you can just let it stay in a glass of water.
When you are flowering clones just to check the sex you can increase the period of darkness. This will speed up the flowering process – however, it will also decrease the harvest yield significantly so it’s not a method to use if you’re seriously interested in the production yield.

Plant Height + Pre-Flower Timing: If your using the same seed strains with all your plants, it can be a safe assumption to make that the taller plants are males and the shorter plants are females. Also note that male plants tend to begin pre-flowering much earlier than female plants.
Calyx Method: Another method is to take a magnifying glass or microscope to the plant’s calyx. If the calyx is raised on a stem then it is most likely a male plant. If the calyx is NOT raised on a stem then it is probably a female plant.
Forcing Cloning: This method is a 100% accurate way of determining your plant’s sex. Begin by taking a cutting (two is best, just in case one dies), from each parent plant whose sex is unknown. It is advisable to somehow place a label or piece of colored tape on the cuttings to identify sets of clones from their corresponding parents. Next give your rooting clones a 12-hour light/dark photoperiod. After a 12-hour day, place the clones in a completely dark area (such as placing a box over them). This will induce flowering. Clones typically tend to show their sex within two weeks. 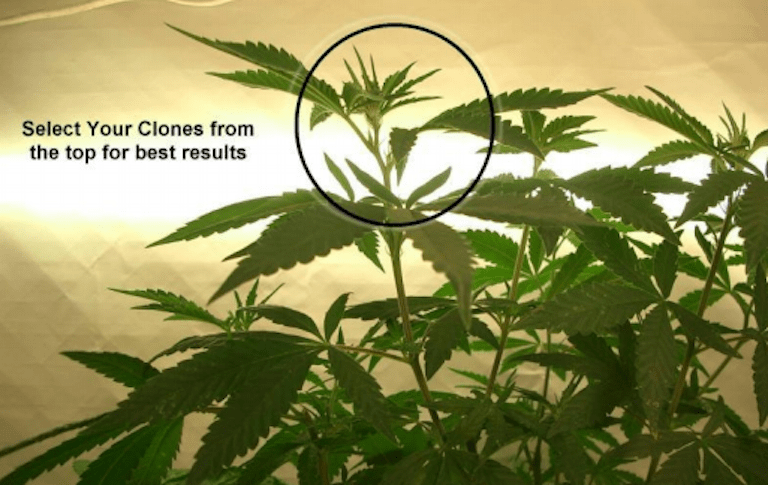 Paper Bag Method: This is an easy & accurate method. To do this, take a piece of a black plastic garbage bag and be secure it to the end of a branch using twist ties. Apply the bag so that the branch receives 12 hours of light and 12 hours of darkness (i.e. on at 6 P.M. off at 6 A.M.) Within three weeks you will see the male plants will have what look like little balls forming on their branches. The females will have two tiny white hairs emerging from an immature calyx. The males can now be removed from your garden and you are guaranteed a crop of all THC rich, bud-producing females.
Once identified, remove the plastic from the branch of the female and she will begin growing as normal again.
Cull out all the males (unless you are using them for breeding purposes) and keep the mother growing in vegetative mode under 18-24 hours of light.